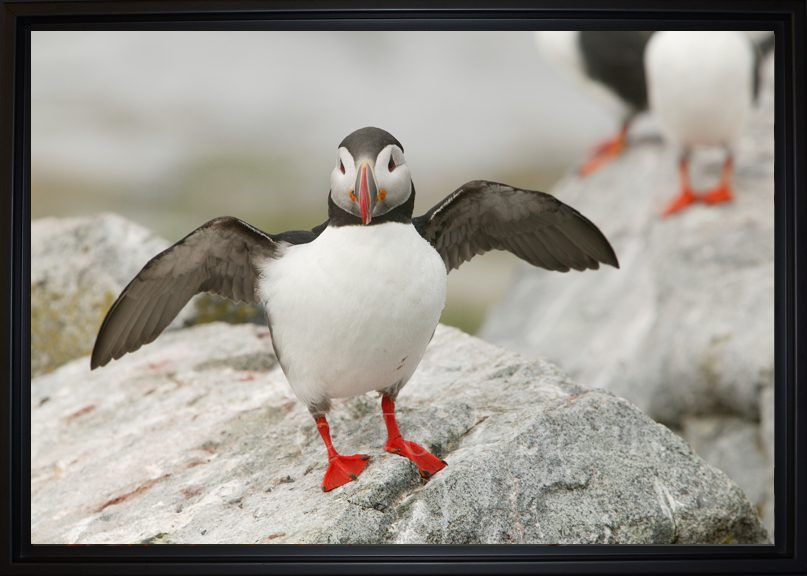 10”h x 7″w archival signed limited-edition museum wrapped canvas print, framed in a simple black frame ~ The Atlantic Puffins are one of the most interesting and unusual birds in North America. The curious appearance of the bird with its colorful huge bill has given rise to nicknames such as “clown of the ocean” and “sea parrot.” To photograph these birds I had to take a hour and a half boat trip (one way) to an island off the coast of Maine. Sea conditions were unpredictable and often prevented landing on the island. (I suggest waiting to eat until after you go). If you make it onto the island, blinds set up by the Canadian Wildlife service are made available for a short period. Here you can observe the colorful puffins, who nest in the rocks around the island, care for their young. By the end of the summer, the new fledglings will follow their parents out to sea where they spend most of the rest of the year.

Over the past decade, there has been a lot of change in the tools we use to create photographs. Digital has taken over. Regardless, one thing remains constant. The “Art” of photography is about searching for and finding interesting and compelling subjects and then recording and sharing these “Moments in Time” in a unique and creative style. I find my pallet in nature. In its complexity I find simplicity and try and convey that with my photography. The moments I witness and record inspire me. And I hope the images I create inspire you. I personally control all aspects of the creative process for each of my prints. All are made using high quality archival materials and are signed and numbered. The tools may have changed, but the Art remains within the artist.
http://www.LazarArt.com